Would you prefer a dual key condo?

The dual key condos have sub-units that may share a foyer and kitchen. Initially, they were meant for multigenerational families.

The dual key condo units were piloted by Housing Development Board, but low demand caused them to be phased out. Frasers Centrepoint introduced a few dual key apartments in 2009 at the Caspian project. The concept took off with the majority of new launches featuring dual key units. They even commanded a premium over similar units that have no dual key. 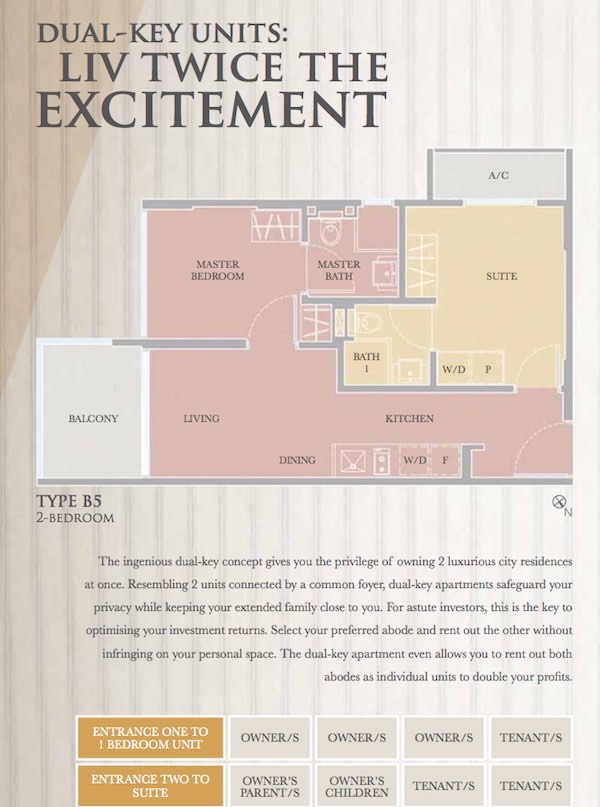 The units are better for housing other members of the family.  Occupying a dual key unit is preferable since it does not incur Additional Buyers Stamp Duty instead of buying 2 units where the second unit will incur. However, the dual-key units are not completely separate and you may end up sharing the kitchen or foyer.

The units can also generate rental income by letting out one of the units. Most tenants prefer them due to the personal space they offer by having a personal bathroom, separate keys and kitchenette.

The growing market for the dual key units has resulted to more creativity. For instance, Bijou @ Pasir Panjang dual key units are duplex with a master bedroom that has a large attic. The Crest @ Prince Charles 3 bedders dual key apartments are flexible and can be used independently, used as a guest suite or converted to a kitchenette.

The Trilive @ Kovan and LIV on Wilkie dual key units come in varying sizes in a residential development while those of City Gate come in 2 and 3 bedroom units in a mixed development.

The second unit of a dual key apartment can serve as a home office. While this may be beneficial to some by saving on rent and daily commute, it has limitations.

Only a few people can fit in and it has to abide by government restrictions on the number of people who can work in a residential space. Also, the distance from the Central Business District can deter its use for those who mind the location.

UP @ Robertson Quay and Bijou are the two developments with dual key units that can be used as home office with their compact Small office Home Office- SOHO. All units at UP @ Robertson Quay are fitted with kitchen appliances from De Dietrich and Duravit and Grohe sanitary fittings. Some of its units come with Murphy bed which can switch from a foldable bed to a work desk.